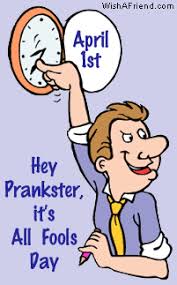 April Fools' Day aka All Fools' Day is an informal holiday celebrated every year on April 1. It is widely recognized and celebrated in various countries as a day when people play practical jokes and hoaxes on each other. Some jokes are mild while some can be very serious because incidence have occurred where people actually get into fights over humor that has been taken a little bit too far.

In the UK, an April fool joke is revealed by shouting "April fool!" at the recipient, who becomes the "April fool". A study in the 1950s, by folklorists Iona and Peter Opie, found that in the UK, and in countries whose traditions derived from the UK, excluding Australia, the joking ceased at midday. A person playing a joke after midday is the "April fool" themselves. In Scotland, April Fools' Day is traditionally called Hunt-the-Gowk Day ("gowk" is Scots for a cuckoo or a foolish person), although this name has fallen into disuse. The traditional prank is to ask someone to deliver a sealed message requesting help of some sort. In fact, the message reads "Dinna laugh, dinna smile. Hunt the gowk another mile". The recipient, upon reading it, will explain he can only help if he first contacts another person, and sends the victim to this person with an identical message, with the same result

In Iran, jokes are played on the 13th day of the Persian new year (Nowruz), which falls on April 1 or April 2. This day, celebrated as far back as 536 BC, is called Sizdah Bedar and is the oldest prank-tradition in the world still alive today; this fact has led many to believe that April Fools' Day has its origins in this tradition.

In Poland, prima aprilis ("1 April" in Latin) is a day full of jokes; various hoaxes are prepared by people, media (which sometimes cooperate to make the "information" more credible) and even public institutions. Serious activities are usually avoided. This conviction is so strong that the anti-Turkish alliance with Leopold I signed on April 1, 1683, was backdated to March 31.

In Italy, France, Belgium, and French-speaking areas of Switzerland and Canada, April 1 tradition is often known as "April fish" (poisson d'avril in French or pesce d'aprile in Italian). This includes attempting to attach a paper fish to the victim's back without being noticed. Such fish feature prominently on many late 19th- to early 20th-century French April Fools' Day postcards.

In 1957, the BBC pulled a prank, known as the Swiss Spaghetti Harvest prank, where they broadcast a fake film of Swiss farmers picking freshly-grown spaghetti. The BBC were later flooded with requests to purchase a spaghetti plant, forcing them to declare the film a prank on the news the next day

December 28, the equivalent day in Spain and Ibero-America, is also the Christian day of celebration of the "Day of the Holy Innocents". The Christian celebration is a holiday in its own right, a religious one, but the tradition of pranks is not, though the latter is observed yearly. After somebody plays a joke or a prank on somebody else, the joker usually cries out, in some regions of Ibero-America: Inocente palomita que te dejaste engañar ("You innocent little dove that let yourself be fooled").

In Mexico, the phrase is ¡Inocente para siempre! which means "Innocent forever!". In Argentina, the prankster says ¡Que la inocencia te valga!, which roughly translates as a piece of advice on not to be as gullible as the victim of the prank. In Spain, it is common to say just ¡Inocente! (which in Spanish can mean "Innocent!", but also "Gullible!").