Foods to eat for better sex

Posted by The New N Used Link Team on Tuesday, September 3, 2013 Under: Relationships 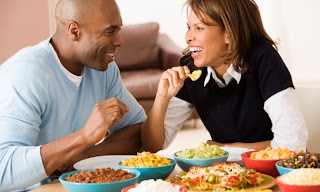 Everybody wants to have great sex. If you're not having any sex, you want it; if you're having okay sex, you want an upgrade to great and if your sex life is great, well, you want it to be mind-blowing. And it's possible. But there's more to great sex than meets the eye. And it begins in the kitchen.A number of people might wonder what simple food could i possible have around me that could enhance my sex life. Many factors can impact ones sex life for example Stress, Boredom and definitely being overweight,being overweight can certainly affect your libido. We could dig in to the science, but it’s pretty self evident, isn’t it? Eat a bag of McDonald’s and you’d probably rather lay around and think about doing it rather than actually getting up and doing it. Have a much lighter, fresher, good-for-you meal and you are more likely to want to follow through. What you’re eating can play a role in your sex life, but not just in how much of the bad stuff you’re eating. Are you getting enough of the aphrodisiac foods when it really counts?

Funny enough, the smellier the better seems to be key with these foods, with oysters, asparagus, and garlic on the list. But what the smelly and non-smelly foods on this list all share is that they’re great for you.

What makes these foods a turn on?

Remember to order these foods if treating your love to dinner, or be sure these ingredients are on the menu before you take to the kitchen yourself. There are plenty of combinations here to cover an appetizer, meal, and dessert. Just don’t get too full!