Posted by The New N Used Link Team on Thursday, April 3, 2014 Under: Disasters 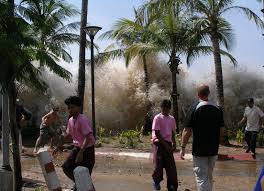 After watching the Impossible a 2012 disaster drama film based on the experience of María Belón and her family in the 2004 Indian Ocean tsunami i had to publish some information regarding a Tsunami.

A tsunami is a series of water waves caused by the displacement of a large volume of a body of water, generally an ocean or a large lake. Disturbances above or below water all have the potential to generate a tsunami for example earthquakes, volcanic eruptions and other underwater explosions.

Tsunamis generally consist of a series of waves with periods ranging from minutes to hours, arriving in a so-called "wave train". Wave heights of tens of metres can be generated by large events and their destructive power can be enormous and they can affect entire ocean basins. Major areas of current research include trying to determine why some large earthquakes do not generate tsunamis while other smaller ones do; trying to accurately forecast the passage of tsunamis across the oceans; and also to forecast how tsunami waves would interact with specific shorelines. Drawbacks can serve as a brief warning. People who observe drawback (many survivors report an accompanying sucking sound), can survive only if they immediately run for high ground or seek the upper floors of nearby buildings. A tsunami cannot be precisely predicted, even if the magnitude and location of an earthquake is known. Geologists, oceanographers, and seismologists analyze each earthquake and based on many factors may or may not issue a tsunami warning. However, there are some warning signs of an impending tsunami, and automated systems can provide warnings immediately after an earthquake in time to save lives. One of the most successful systems uses bottom pressure sensors, attached to buoys, which constantly monitor the pressure of the overlying water column

In some tsunami-prone countries earthquake engineering measures have been taken to reduce the damage caused onshore. Japan, where tsunami science and response measures first began following a disaster in 1896, has produced ever-more elaborate countermeasures and response plans. That country has built many tsunami walls of up to 12 metres (39 ft) high to protect populated coastal areas. Other localities have built floodgates of up to 15.5 metres (51 ft) high and channels to redirect the water from incoming tsunami. However, their effectiveness has been questioned, as tsunami often overtop the barriers. The 2011 Fukushima nuclear disaster was directly triggered by a tsunami that exceeded the height of the plant's sea wall. The Okushiri, Hokkaidō tsunami which struck Okushiri Island of Hokkaidō within two to five minutes of the earthquake on July 12, 1993 created waves as much as 30 metres (100 ft) tall as high as a 10-story building. The port town of Aonae was completely surrounded by a tsunami wall, but the waves washed right over the wall and destroyed all the wood-framed structures in the area. The wall may have succeeded in slowing down and moderating the height of the tsunami, but it did not prevent major destruction and loss of life.

Tags: tsunami
« Back to posts